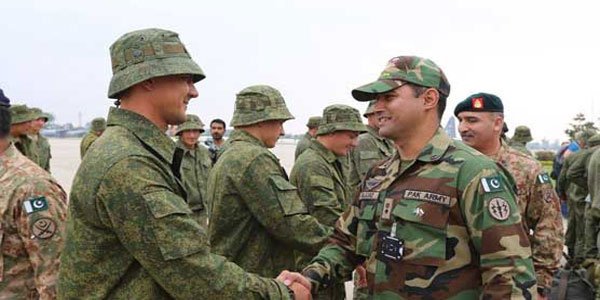 International desk – The Russian authorities have clarified that it would not conduct a joint military exercise with Pakistan in the disputed land of Kashmir.

Shortly after Russian news agency Tass reported that the first-ever joint military exercise between Russia and Pakistan will open at Rattu in Gilgit-Baltistan, the Russian Embassy in Delhi issued denial calling the reports “erroneous” and “mischievous”

The Indian Express newspaper reported that the Russian embassy in New Delhi in a statement said “the Russia-Pakistan anti-terror exercise is not being held and will not be held in any point of so-called ‘Azad Kashmir’ (Pakistan-occupied Kashmir) or in any other sensitive or problematic areas like Gilgit and Baltistan.”

“The only venue of the exercise is Cherat,” it added.

This is in Khyber Pakhtunkhwa, 34 miles south-east from Peshawar. Tass also edited its online story to remove the quote it had attributed to the Russian Southern Military Command’s press service mentioning Pakistan Army’s High Altitude School at Rattu in Gilgit-Baltistan as being a venue for the “opening ceremony drills.”

India considers Gilgit-Baltistan to be part of the territories illegally occupied by Pakistan.

A unanimous 1994 Parliamentary resolution mentions the illegal occupation of Gilgit-Baltistan, erstwhile Northern Areas, and Prime Minister Narendra Modi raised the issue of these territories during his Independence Day speech at the Red Fort.

According to Tass, around 70 Russian troops arrived at Rawalpindi in Pakistan on an Ilyushin Il-76 military transport plane Friday to take part in Friendship 2016, a two-week military exercise with Pakistan.

The exercise between the two Cold War enemies is being held amid widespread speculation that it would be cancelled in the wake of Sunday’s terror attack on the Indian Army base in Uri in Jammu and Kashmir.

India has launched a diplomatic offensive against Pakistan, following the attack which led to the death of 18 soldiers at the hands of Pakistani terrorists.

In a statement tweeted by Ministry of External Affairs spokesperson Vikas Swarup on Tuesday, Russia had strongly condemned the terrorist attack on the Indian military unit.

The Russian message said that “it is alarming, and according to New Delhi, the attack on military unit near the town of Uri was committed from the territory of Pakistan.”

According to Russian news agency, RIA Novosti, Moscow informed New Delhi of the scheduled joint exercise with Pakistan and said they would not concern India, considering that they are conducted far from disputed territories, Zamir Kabulov, the chief of Russian Foreign Ministry’s Middle East department had told RIA Novosti.

In March 2010, during his visit to New Delhi, Russian President Vladimir Putin had said that “unlike many other countries, Russia does not have any military cooperation with Pakistan because we bear in mind the concerns of our Indian friends”.

But Russian military cooperation with Pakistan has been increasing over the past few years, with the two countries signing a deal on four Russian Mi-35M attack helicopters last August.

In the past 15 months, Pakistani army, navy, and air force chiefs have visited Russia, signaling an upswing in the bilateral military ties.

This is in contrast to the Cold War era when Islamabad was a key supporter of the American-supported Mujahideen fighting the Soviet forces in Afghanistan.

Interestingly, the eighth edition of the Indo-Russia joint military exercise ‘Indra 2016’ was flagged off in Vladivostok in Russia on Friday.

Indra, a portmanteau of the names of both the countries, is a biannual exercise which has been carried out between the two allies since 2003. This year, the focus is on Counterterrorism Operations in Semi Mountainous and Jungle Terrain under United Nations Mandate.

A total of 250 troops from the Kumaon Regiment of the Indian Army and a same number of Russian troops from the 59th Motorised Infantry are participating in the joint exercise.

The Indian Army contingent reached Vladivostok on September 21. The 11-day exercise being conducted at the Sergiveskey of the Russian Federation will be held from September 22 to October 2.