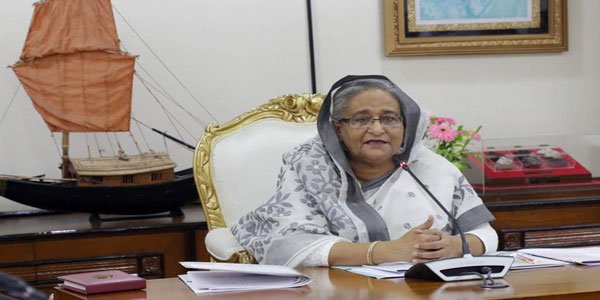 Dhaka – Prime Minister Sheikh Hasina has asked the development planners to be farsighted in outlining blueprints for future expansions taking into long-term context of structural works to aver complexities.

“We will have to garner farsighted and transparent thinking to avert future complexities, not to confine in the present context” the Prime Minister said while addressing members of her cabinet from greater Mymensingh region.

She was reviewing future development programmes for the newly announced administrative district of Mymensingh.

The prime minister said the national population now stood at 16 crore, a scenario that warrant more decentralization of authoritative centres to reach services to the common people.

She said that Dhaka was a big division earlier with 17 districts while it was trimmed down with the creation of new division in Mymensingh.

The central Dhaka division is likely to be sliced further in future, said Hasina.

She reiterated her government’s commitment to strengthen further the local government institutions to ensure more services to common people, especially in the fields of administration, health, education.

With construction and development of necessary divisional infrastructures, the people of greater Mymensingh would have easier access to services more comfortably.

A modern and beautiful city would be established on the other bank of the River Brahmaputra, she promised.

The premier also renewed her vow to turn Bangladesh into a developed and prosperous ‘Sonar Bangla’ as dreamt by Bangabandhu Sheikh Mujibur Rahman, the architect of independent Bangladesh.