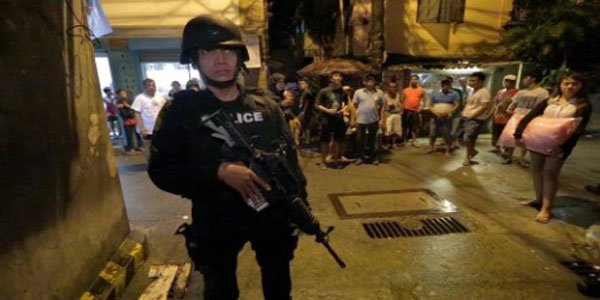 International desk – A 6-year-old Manila boy killed in his sleep is among the latest victims in the ongoing violence against suspected drug criminals in the Philippines, according to a CNN news feature.

“There was a knock on the door,” said Elizabeth Navarro, who is pregnant and already a mother of five at 29. “My husband said who’s that? Then I heard two gunshots.”

By the time Navarro realized what was happening, her husband, Domingo Mañosca, and son, Francis, were dead. The gunmen were gone, in what has become open season for anyone suspected of being tied to drugs.

Since taking power in June, President Rodrigo Duterte has waged a brutal “war on drugs.” The crackdown has been linked to more than 5,900 deaths.

On Monday, one day after the latest killings, Duterte revealed he personally had killed drug suspects while serving as mayor of his hometown, Davao City.

A critic calls for impeachment

“These are mass murders,” she said. “High crime is a ground for impeachment under (the) constitution.”

Among the dead so far, almost two-thirds were killed in extrajudicial or vigilante-style killings, the rest in police operations. More than 40,000 suspects have been arrested.

Many of these vigilante killings are suspected of having police ties deliberately obscured to avoid an investigation. Duterte has long been accused of using his war on drugs to weed out political opponents.

Duterte has publicly accused De Lima of benefiting from a drug ring inside a Manila prison and claimed she made a sex tape and had an illicit affair with her driver/alleged criminal accomplice.

Amid popularity, a plea for help

Public opinion polls show the majority of Filipinos support Duterte’s war on drugs. They say it makes their communities feel safer. But on the crowded streets of a Manila slum, no one was calling this number of killings justified.

“They are killing left and right,” one woman said. “Sometimes they kill 10 or 20 a day. I’m scared. These days you don’t know who’s your enemy.”

Francis’ mother said he was a happy child and was due to begin school next year. In the slum of Pasay City, young children often ask for money. But Francis was known for smiling and dancing in exchange for one peso, about 20 cents.

Domingo’s mother, Maria Musabia, said he began using shabu, or meth, when he was 29. It is popular among the Philippines’ poor as a way to increase energy and suppress hunger.

Six months ago when Duterte launched his war on drugs, Domingo stopped using and turned himself in. Police took a statement and let him leave. His family says he hasn’t used since, as Duterte promises more killings to come.