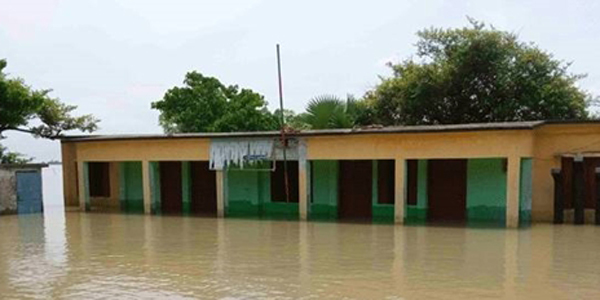 Struggling to cope with the steep climb of COVID-19 cases and after cyclone Amphan, deltaic Bangladesh is now facing massive flooding after almost a decade with capital Dhaka under threat, officials here said Monday.

Run-off from the hills in neighbouring India and heavy monsoon rains triggered the current floods that has affected many parts of this overcrowded calamity-prone South Asian country.

Officials at the government’s Flood Forecasting and Warning Centre (FFWC) told newsnextbd.com that water has been gushing in from the upstream and rains have also been heavy which could lead to a major deluge, the worst in about a decade.

More than 2.8 million people have so far been affected as the gushing floods water have not only affected northern and north-eastern parts of Bangladesh, but districts close to the capital Dhaka have also been submerged.

“My crop field has been flooded in the past 24 hours … my home may also get flooded and we are preparing accordingly,” Harun or Rashid, a farmer in Ghatail area told newsnextbd.com by telephone.

The Disaster Management and Relief Ministry has alerted at least 23 districts to prepare for facing the monsoon floods.

Twenty out of 64 administrative districts have been so-far been submerged by floodwaters prompting more than 62,000 people to move to some 1,467 shelters opened in response to the disaster.

Disaster Management Ministry official Tasmin Ara Azmiri said a total of 22 people have been died since the flooding begun in the late June. They either drowned or electrocuted.

Emergency supplies of rice, dry food, baby food and cash had been dispatched in the affected areas, mostly in the northern parts of Bangladesh.

Water Development Board official Arifuzzaman Bhuiyan said the heavy monsoon rain in parts of Bangladesh and India caused the flooding. It will continue to deteriorate for a week.

Flood Forecasting and Warning Center predicted the waters are likely to start receding from July 27 as major rivers have burst their banks.

Bangladesh, a Himalayan delta of more than 160 million people, shares 54 rivers with India. Part of the riverine country submerges almost every year during the monsoon between June and September.

In 1998, a flood submerged two-thirds of the South Asian country for more than two months, causing extensive damage.

Officials at the Bangladesh Water Development Board said the Brahmaputra was flowing 101cm above the danger level at Chilmari point, and was above 95cm above at Nunkhawa point.

The FFWC said along with some other districts, the flood situation in the central district of Dhaka, also the capital, would deteriorate further in the next 24 hours.

According to the current forecast, this flood has 50 per cent chances to cross 1 in 10 years on 21 July. Thousands of people in low-lying areas are witnessing the second phase of floods this season due to rise of water levels of major rivers in the country, according to the Reliefweb.

The UN office in Dhaka said flood protection infrastructures such as embankments, dykes, dams and sluices are already damaged. In many rivers, bank erosion has been observed and expected to be more severe when flood water starts receding.

Bangladesh went under water during severe flooding in 1988 and 1998, but the government machinery, like cyclone Amphan, is ready to face any eventualities and emergency aid is being dispatched to the affected.

COVID-19 has affected more than 200,000 and killed 2,668 people so far, with fragile health sector that has been affected to graft.