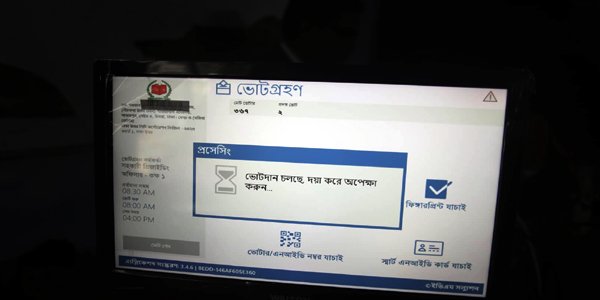 Dhaka – Thousands of voters cast their vote for the first time on a machine on Saturday after the polling stations opened across Dhaka, the capital of Bangladesh, for the mayoral race.

More than 5.4 million eligible voters registered with the election commission have their chances to go to the polling station and choose representatives who will run administration of the city divided into two administrative units – North and South.

Prime Minister Sheikh Hasina cast her vote at a center in Dhaka and she openly said that she had cast her vote for “Boat” the election symbol of the ruling Awami League party. Major mayoral contestants – Atiqul Islam and Fazle Noor Tapash of the Awami League and Tabith Awal and Israque Hossain of the opposition Bangladesh Nationalist Party (BNP)- also cast their vote in the city election.

The voting started at 8 am and will run without break until 4pm.

The election commission deployed more than 30,000 security personnel were deployed to maintain order during and after the polling. Plying of all motorized vehicles in the city was banned.

The voters will elect two mayors, 127 councillors, and 41 female councillors on the seat reserved for the women in the bifurcated city. Two councilors were elected unopposed.

In mayoral positions 13 candidates — six in the Dhaka north and seven in the south – are running the race. But the race is expected to remain confined between the Awami League and the BNP.

Chief Election Commissioner KM Nurul Huda called upon the voters to go to polling centres and cast their votes without fear.

Members of police and ansar have been deployed to ensure security at polling centres while paramilitary Border Guard Bangladesh, members of the Rapid Action Battalion and the river police will ensure security in the election areas.