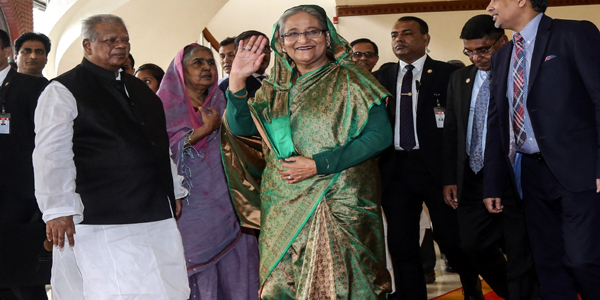 Dhaka – Prime Minister Sheikh Hasina has left Dhaka for Sydney to join the Global Summit of Women in Australia, where she will be conferred with a leadership award, officials said on Thursday.

Bangladeshi Prime Minister is expected to highlight at the international gathering her efforts to improve the conditions of women in the South Asian country, for which she is honoured with the Global Women’s Leadership Award-2018.

Hasina will receive the award on Friday at a ceremony at International Convention Centre in Sydney with Vietnam Vice President Thi Ngoc Thinh and former President of Kosovo Atifete Jahjaga.

Women leaders from across the globe will join the conference.

A Thai Airways flight carrying the prime minister and her entourage members departed Dhaka airport in the afternoon. She is expected to arrive in Sydney in the Friday morning.

Hasina is scheduled to hold a bilateral meeting with Australian Prime Minister Malcom Turnbull on April 28, while Australian Foreign Minister Julie Bishop is expected to call on her during the three-day visit.

She is expected to return home on April 30.