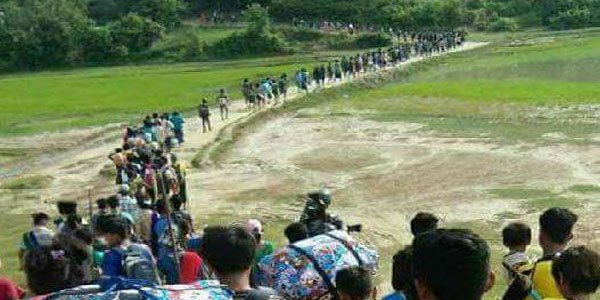 Dhaka – Law enforcers have set up a number of checkpoints on highways linking Cox’s Bazar from other parts of the country apparently to prevent Rohingya Muslims from traveling beyond areas they were designated for living.

The lawmen at any point may ask you for your identity while traveling to and from Cox’s Bazar. It is better you to have one of your photo identity cards (National ID and driver’s license) while you are on that route.

The Home Ministry on Tuesday asked the transport operators in Cox’s Bazar to check passengers’ identity.

There are concerns that the Rohingya Muslims who crossed into Bangladesh would take a chance to come out of their makeshift settlement as food and shelters are a major problem there.

The government has also launched a scheme to get to more than 436,000 refugees registered with their photographs.

“We want to stop them (Rohingya) from traveling outside the shelters in Cox’s Bazar,” Home Minister Asaduzzaman Khan said.

He told state-run Bangladesh Sangbad Sangtha news agency that all passengers would have to produce their photo identity cards, while availing in any kind of transport in the area as law enforcement agencies installed check points in different points.

Inspector General of Police Shahidul Hoque earlier said more than 200 Rohingya were detained from various parts of the country.  They were sent back to their camps in Cox’s Bazar since the latest influx from Myanmar began in August 25.

Police and spy agencies across Bangladesh were alerted about the possible infiltration by the Rohingya Muslims as basic feature of their bodily structure, colour and behavior have little difference with the Bangladeshi citizens.