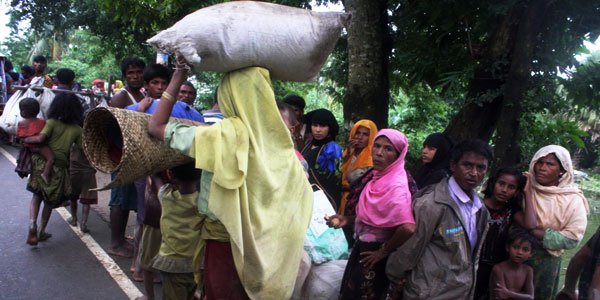 Dhaka – The surge of Rohingya still seems unending with more than 123,000 persecuted Muslims entering Bangladesh since a deadly violence erupted in restive Rakhine state of Myanmar.

Officials at the aid agencies say the number of hungry, thirsty and sick refugees is rising every day and they are pouring in the south-eastern Bangladeshi district of Cox’s Bazar bordering Myanmar’s Rakhine State.

According to an estimate by the United Nations High Commission for Refugee at least 123,000 displaced people entered Bangladesh territory in the last 10 days.

Joseph Tripura, spokesman for UN refugee agency in Dhaka, said the estimate is based on the local and international non-governmental organizations working for the refugees in Cox’s Bazar where nearly 400,000 Rohingya live in squalid camps.

He said the newly arrived people are in dire need for food, shelter and medical attention. Many of them could not eat for several days when they were on their way to Bangladesh fleeing homes in Myanmar.

The mass exodus of Rohingya began on August 25 after at least 400 people were killed in attacks and counter attacks between suspected Rohingya insurgents and Myanmar security forces on August 25.

The Myanmar army say at least 375 of those killed were terrorists involved in the attacks carried out on army bases and police posts in the Rakhine state.

The people who fled violence says that the army killed innocent civilians, set their homes to fire and drive them away from the homes. Many of them complained that the army fired their guns on the fleeing civilians.

Correspondents visited Bangladeshi villages bordering Myanmar say that they saw black smoke on the horizon on the other side of the border. They also heard sounds of repeated gunshots when thousands of Rohingay trapped on the border between Bangladesh and Myanmar.

Dozens have died trying to cross a river into Bangladesh in an effort to escape the unrest.

Most of the new arrivals were accommodated in schools, community centers, madrasha and even in the mosques. Many were remain in the open while few others were trying to build makeshift shelters on the waysides to get a roof on their heads.

“We have accommodated 10 families with us trying to find new places for their settlement. The women and children are living in the homes while the men took shelter in a mosque,” Hafiz Ullah, a refugee living in Kutupalong camp, told newsnextbd.com.

He said tens of thousands of people are still coming in from Myanmar.

“We heard the Burmese army and their local vigilante groups are still in the killing spree. They are carrying out torture on men, women and children as well,” he said referring to the statements by those who flee the latest wave of violence.

The UN refugee agency and its partners have also set up some tarpaulin-covered structures in the camps, but these facilities are reaching saturation point, said an official in Cox’s Bazar.

Shubhash Wostey, UNHCR’s head of office in Cox’s Bazar, said the people, who arrived in the camps crossing a long way are hungry, thirsty and sick.

“They deserve at least a roof over their heads,” he said in a UNHCR article adding that the agencies need more land to build emergency shelters.

Indonesian minister in Dhaka for talks on Rohingya

Indonesian minister in Dhaka for talks on Rohingya